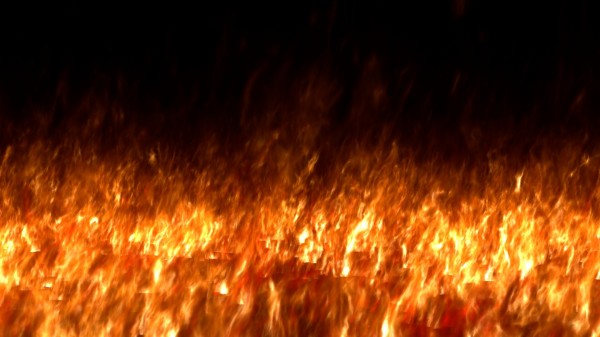 Before diving into the shader itself, let’s talk about UV or UVW.
UVW stand for XYZ but in texture space. it’s referenced by UV for  image textures and Vector for other nodes.

Generated UV for a cube, from bellow:

the point we see in the middle of the picture is black, it represent the origin of the UVW bounding box. It will be the default origin of all 3D textures

let’s try the gradient spherical (despite is written quadratic in the screenshot) :

notice that  the generated output is not plugged in the gradient texture but it’s the same as if it was, also, the center of the sphere is at the origin

So guess waht,  we already started the fire shader, after all fire is a ball of fire that emit light so I’ll create an emission shader and plug it into the material output volume and put nothing in the surface node and plug the gradient into the strength of the emit

there is no visual difference… until we turn around or we put something in it :

I’ve found that working with kelvin was a good  and fast way to create the fire color, insteads of ramp, we’ll use a blackbody converter for that purpose.

Fist problem, the fire is in the corner and  we want the fireball to be at the center of the cube before deforming it, we need to move the origin, we’ll need finally to use the generated texture coordinate.

A bit of math, I’ll only talk about the X coordinate, it’s the same principle for the 3 axes
we want X :0.5 the center of the cube, to become 0.0, because gradient use 0 for origin so, 0=0.5-0.5 , easy
just plug  the generated texture coordinate,  into a vector math node in subtract mode to and because the default value for x,y and z in the vector node is 0.5, the job is done

Second problem, the radius of the sphere gradient is 1 so most of the sphere is outside the cube, because no matter the size of the cube its generated UVW goes from 0.0,0.0,0.0 to 1.0,1.0,1.0
let’s scale it with a custom node group, an easy one 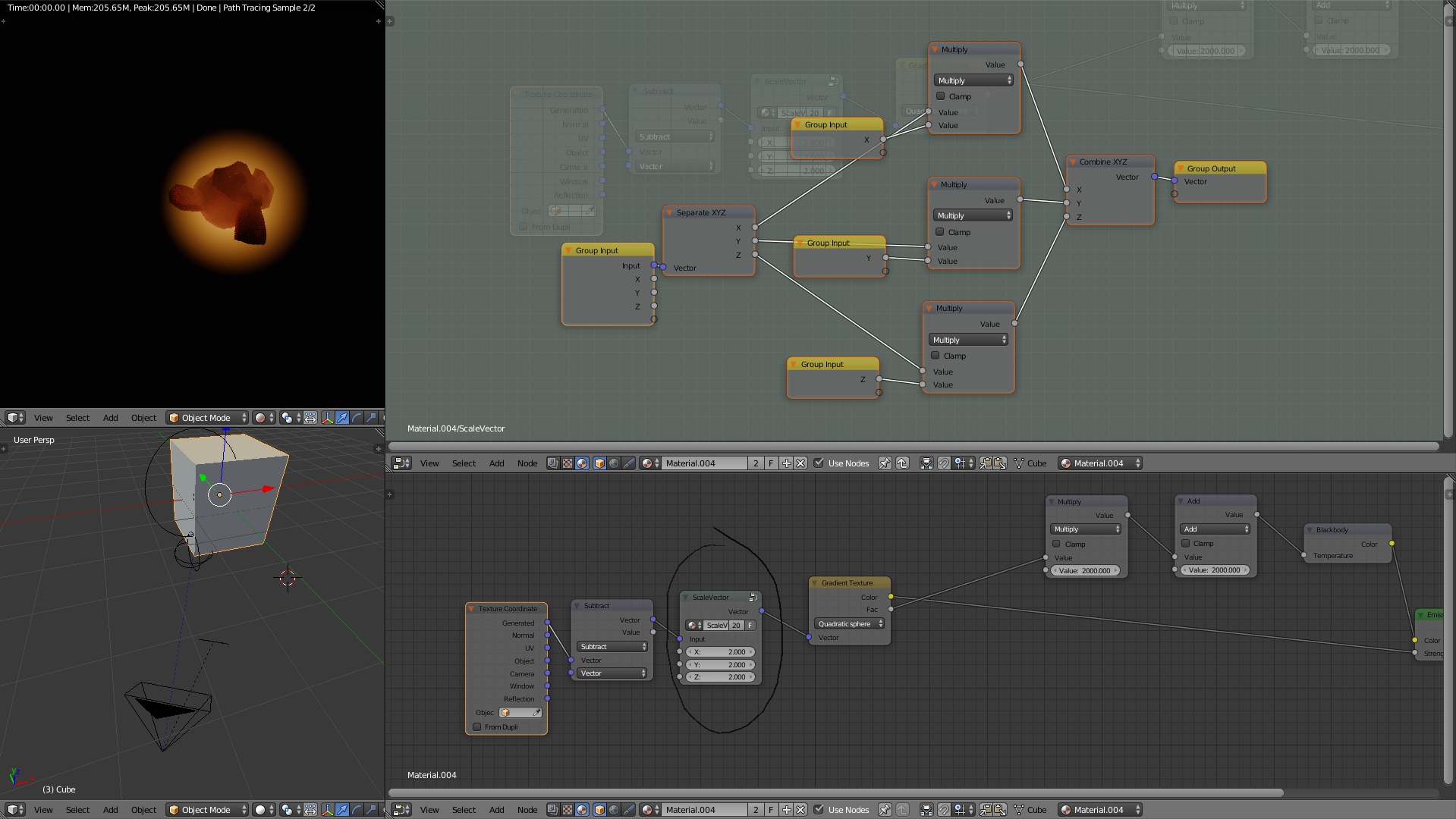 Note how I have duplicated the input node to make the graph more readable, for small nodes like this it’s not a problem but when you reach 50+ nodes (and you will) I can be a nightmare of spaghetti. 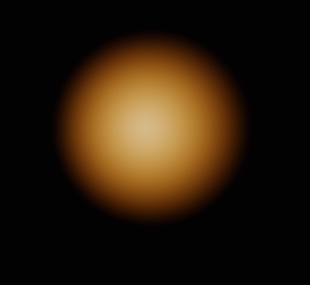 It looks even better without suzanne

before deforming UV, it’s a good Idea to make a nodegroup  to save screen space , with fixes value hidden and others, “public”  but before that we’ll add a multiplier for the strength of the emission node like that (grease pencil circle) :

now select all nodes except the material output, the texture coordinate and the value use in the multiply and press ctrl+g, press tab to go outside the node group and you should have something like that: 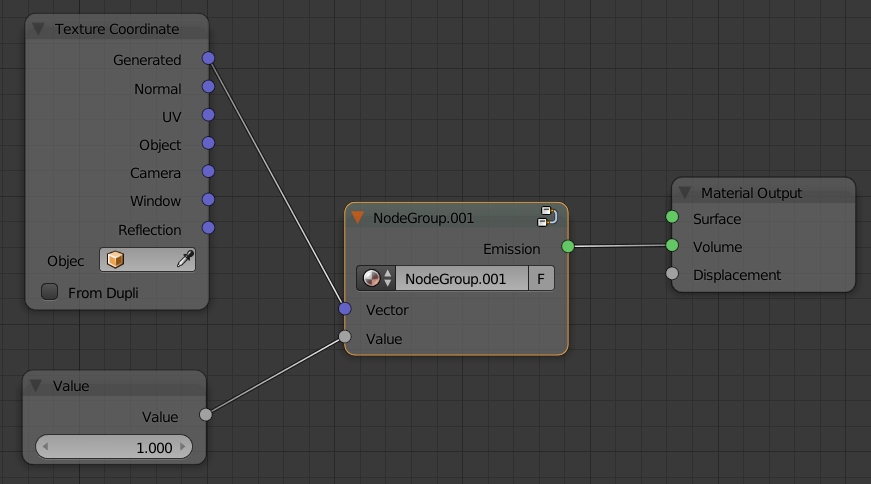 rename it flame and go inside by pressing tab again, we forget something .. to make the color temperature value public, with a bit of simple math we add the minimum temperature to the difference between the maximum and the minimum, multiplied by the factor output of the gradient. once again, for readability, duplicate the inputs and RENAME your slots 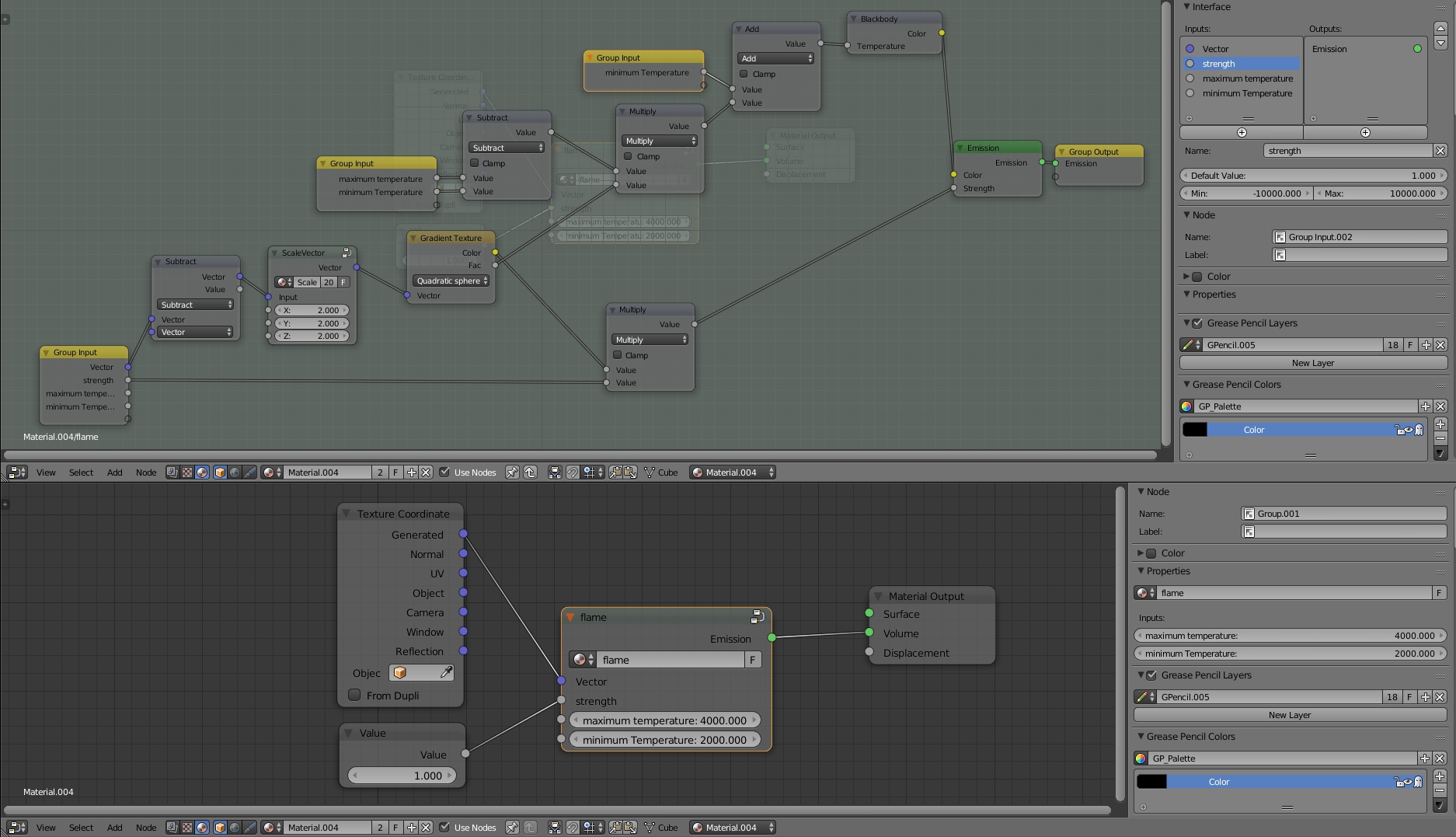 The good things is that if you press the little F on the node near the node name and you save you statup scene now, You will never have to redo that thing again. The bad news it that it’s only the part one of the tutorial.

Questions, typo, suggestions, whatever, feel free to use the comments